Transportation and accessibility remain one of the Village’s best assets. Interstate 294 is at the eastern boundary of the Village with interchanges at Lake-Cook and Palatine Roads. I-294 allows quick access to O’Hare International Airport, Chicago’s Loop, and the Regional Interstate System. Illinois 53, just west of Wheeling via Lake-Cook and Dundee Roads, also leads to the Interstate System. North-South Routes U.S. 45 and Illinois 83 offer easy access to other Chicago communities.

Wheeling is also home and co-owner of the Chicago Executive Airport, serving the general and business aviation sector. The third busiest airport in Illinois, after O’Hare International and Midway, approximately three hundred aircraft are based on the field with 200,000 take-offs and landings annually.

Commuter rail is also available to Wheeling residents, employees and visitors via the Metra North Central Line at the Wheeling Metra Station. The North Central Line has regular service to and from Chicago’s Union Station, O’Hare Airport, and to suburban communities further north. Public transportation within the Village and to nearby communities is provided by Pace bus lines. 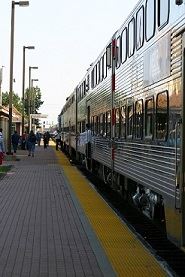