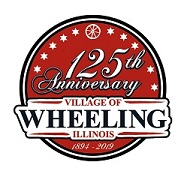 In honor of the Village of Wheeling turning 125, we will be hosting an anniversary parade and concert in the park at Heritage Park on Sunday, June 23.
Our parade will be focused solely on celebrating Wheeling and its stakeholders, and is not affiliated with any Independence Day celebrations.

The parade will begin at 4 p.m. and run eastbound on Dundee Road from Northgate Parkway to Wolf Road. Parking will be available at Village Hall, the Wheeling Police Station, St. Joseph the Worker church and social hall, and the Wheeling Park District.

At 5:30 p.m., immediately following the parade, enjoy the music of tribute band EagleMania at the Wheeling Park District’s outdoor Performance Pavilion in Heritage Park. EagleMania has been thrilling audiences all over the country with their stunning five-part harmony and their uncanny ability to emulate the unmistakable sound of the Eagles. Their show features the Eagles’ greatest hits as well as some of the solo work of Don Henley, Glenn Frey, and Joe Walsh.

The parade and concert in the park are free events. For more information, visit www.wheelingparkdistrict.com or call 847.499.9082.